MIFF 2010: The Myth of the American Sleepover 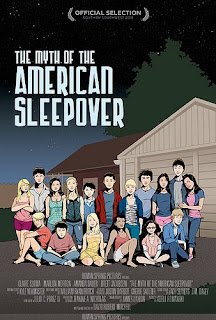 In the 19th Century the world’s population was divided up into adults and children, but with the dawning of the 20th Century a new social strata began to develop, fuelled by novels such as Booth Tarkington’s Seventeen (published in 1916) and films such as 1937’s A Family Affair (starring a 17 year old Mickey Rooney). Together with the social changes wrought by the availability of the automobile and increased retention rates in secondary schools, these expressions of popular culture helped give birth to a gangly new creature: the American teenager.

By the 1950s the teen was firmly ensconced in popular culture, with films such as The Blackboard Jungle and Rebel Without a Cause recognising teenagers as a discrete, separate age group with their own rituals, rights and demands, but also acknowledging their parents’ concerns around issues such as juvenile delinquency and adolescent rebellion.

Parents are nowhere to be seen in David Robert Mitchell’s The Myth of the American Sleepover, a gently paced tale of teenage discovery that’s set, like American Graffiti and the more recent Nick and Nora’s Infinite Playlist, over an eventful, single, summer night.

There are no mobile phones, iPods and computers evident in Mitchell’s debut feature; it’s as if he was trying to make a film set anywhere and any-when; and instead of Larry Clark and Catherine Hardwicke style melodrama, Mitchell has crafted a deliberately anti-dramatic demythologising of the clichés and tropes of Hollywood’s long history of teenage dramas.

Four main characters dominate the ensemble cast: Maggie (Claire Soma), a wilfully independent girl who rejects her compatriots’ slumber party for more adult pleasures; horny heartthrob Rob (Marlon Morton) who cruises the town in hope of meeting up with the mysterious blonde girl he met by chance in the supermarket, and whose obsession blinds him to the fact that his best friend Marcus (Wyatt McCallum) is clearly in love with him; Claudia (Amanda Bauer), the new girl in town, whose presence disrupts her school’s carefully structured pecking order; and the marginally older Scott (Brett Jacobsen), a college student nursing a recently broken heart, who has returned to his home town to heal, and perhaps find new love.

Naturalistic in tone, and featuring a strongly performing non-professional cast, the film suffers at times from some poorly lit scenes and mumbled, inarticulate dialogue. None of the characters are especially well drawn, making it difficult to care about them, and Mitchell is at such pains to avoid and subvert the clichés of traditional teenage movies that he drains any real sense of drama out of his story.

The winner of the Special Jury Prize for Best Ensemble Cast from the SXSW Narrative Feature jury, The Myth of the American Sleepover clearly resonates with some viewers, who find its slight nature charming and its simplistic characters subtle. I found it meandering, stilted, and quite frankly, a little dull. Perhaps its quintessentially American story simply fails to translate for this Australian viewer?

Rating: Two and a half stars

Posted by richardwatts at 10:27 am